DRIVE SMART Weld County is excited about Buckle Up Drive Smart program's 7th year!   The safe driving awareness, peer-driven program allows teen groups/schools the opportunity to earn up to $1,000.00 for their organization or club.   Activities can be simple or complex and are awarded a monetary value accordingly.  Each school is given a $200 budget to use for supplies for activities. For more information contact Marjorie Hanson, Public Outreach Coordinator  970.381.8237  drivesmartweldcounty@gmail.com

See below for activities from participating schools!

Congratulations to our BUDS schools!  Due to Covid 19 we weren't able to celebrate in person but that didn't stop them from getting their well earned reward!

Buckle Up Drive Smart School Activities 2018/2019
Congratulations to the five groups that participated in our 2018/2019 program!

Fort Lupton Student Council - Earned $1,000
Greeley West Fashion Club - Earned $1,000
Platte Valley FCCLA - Earned $700.00
Prairie FBLA - Earned $1,000
Windsor Charter Academy National Honor Society - Earned $150
Buckle Up Drive Smart School Activities 2017/2018
November 14 - 20, 2017
The Greeley West AVID group had all school announcements to encourage students to drive safely using some of the information they researched.
​
Tuesday  11/14
Traffic fatalities have risen by 24 percent since 2014.
Colorado is growing, but that doesn't mean traffic fatalities must grow too.
Wednesday  11/15
There were 17,854 seatbelt violations in 2017 in the state of Colorado.
Be safe, buckle up.
Thursday  11/16
There have been 507 traffic fatalities on Colorado Highways so far in  2017
Make sure you are driving distraction free.  In case someone else isn’t.
Friday 11/17
In Colorado you are 13 percent more likely to die from a car crash if your dog is in the car.
Keep your pets home or secured in the car.
Monday  11/20
There are 26,000 reports of drunk driving in Colorado every year.
Be Smart, don’ drive drunk.
Tuesday 11/21
Last year 605 people died on Colorado roadways.  Most were suspected of being caused by alcohol l and drugs.
Don’t be stupid.  Be sober.

October 2017 Greeley West Avid group show off their posters.
Buckle Up Drive Smart ​School Activities 2016/17
We are excited to announce the award winners of our Buckle Up Drive Smart campaign for the 2016/17 school year!
May 19. 2017
Congratulations to Sara Chandler and Windsor Charter Academy! Sara's Buckle Up Drive Smart projects earned the school $500!   Sara organized a Safe Driving event this spring and organized her peers to participate and create a video. 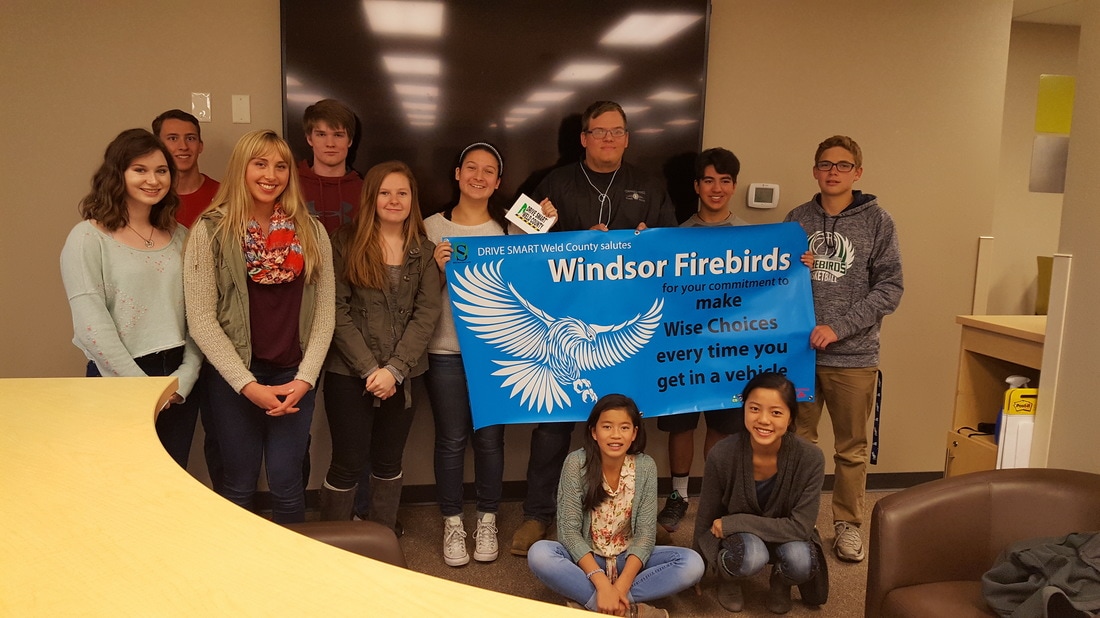 May 15, 2017
Platte Valley FCCLA was awarded $550 for their Buckle Up Drive Smart activities over the year!   This is the second year PVHS has participated.  They submitted a winning video and had a very creative pre-prom safety campaign along with several other activities over the school year. Sponsoring teacher Janet Niederkorn posed with students and DRIVE SMART Weld County representative Marjorie Hanson at the celebration party. 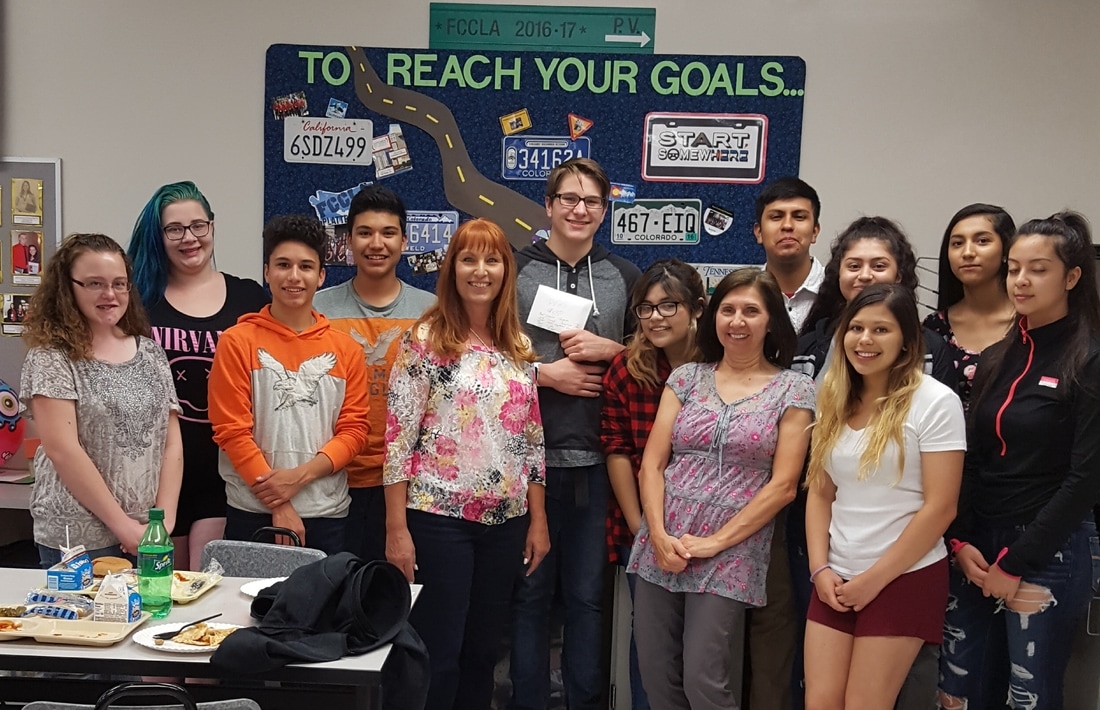 ​May 4, 2017
​Prairie High School FBLA was awarded $600 for their Buckle Up Drive Smart activities over the 2016/2017 school year which included presenting driving safety issues to every grade!  Sponsoring teacher Kyle Coles posed with students at their celebration pizza party. 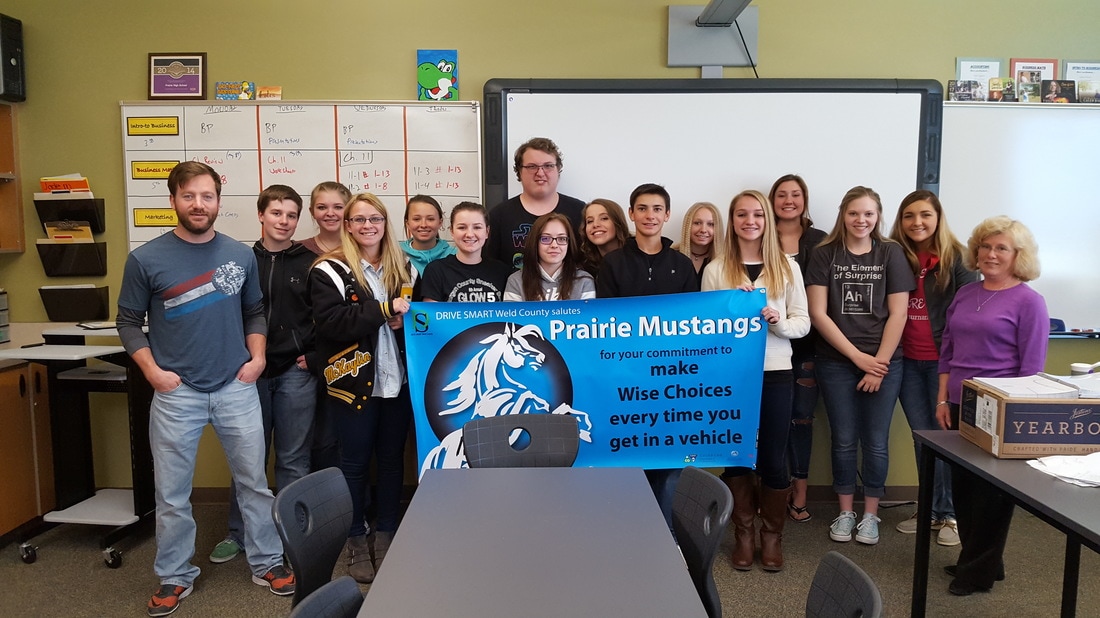 April 26 2017
Platte Valley High School FCCLA organized a pre-prom safe driving campaign.  Every student driving to prom is invited to sign the pledge below.  Yellow ribbons will be tied on each antenna in the parking lot along with an all school announcement reminding students about the pledge. 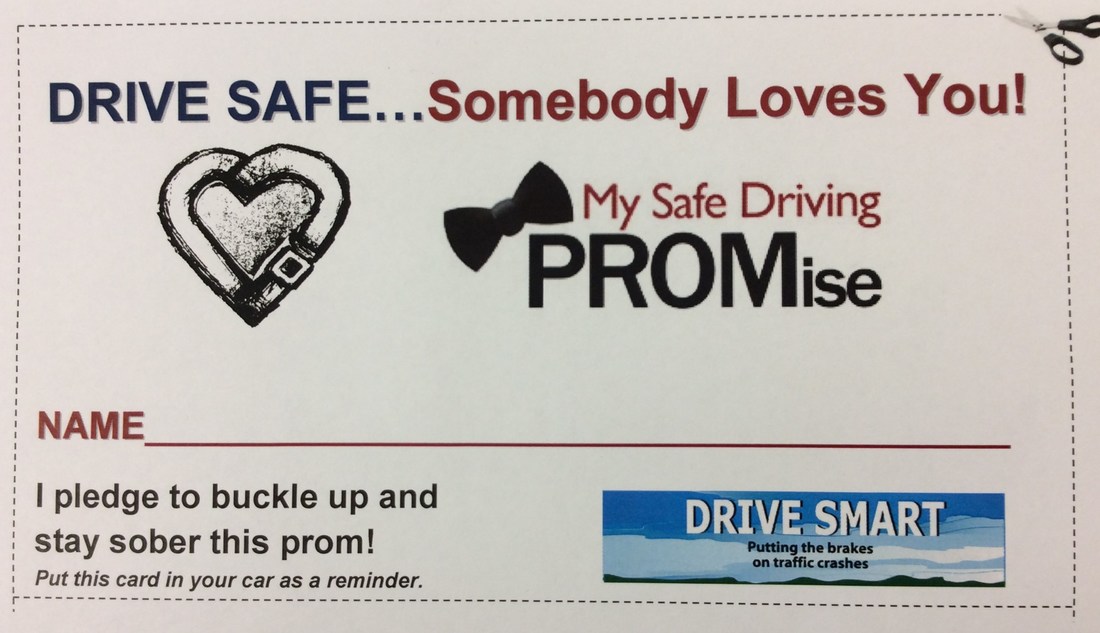 April FBLA Week
Prairie High school FBLA students divided into pairs and each presented to a class room k-12.  Members created a slide show based on the grade level.  Younger grades were taught about car seats and distractions while older groups were informed on distractions and texting.  Both groups were taught the importance of buckling up.

​After the presentation, grades 8 - 12 were invited to pledge not to text and drive. 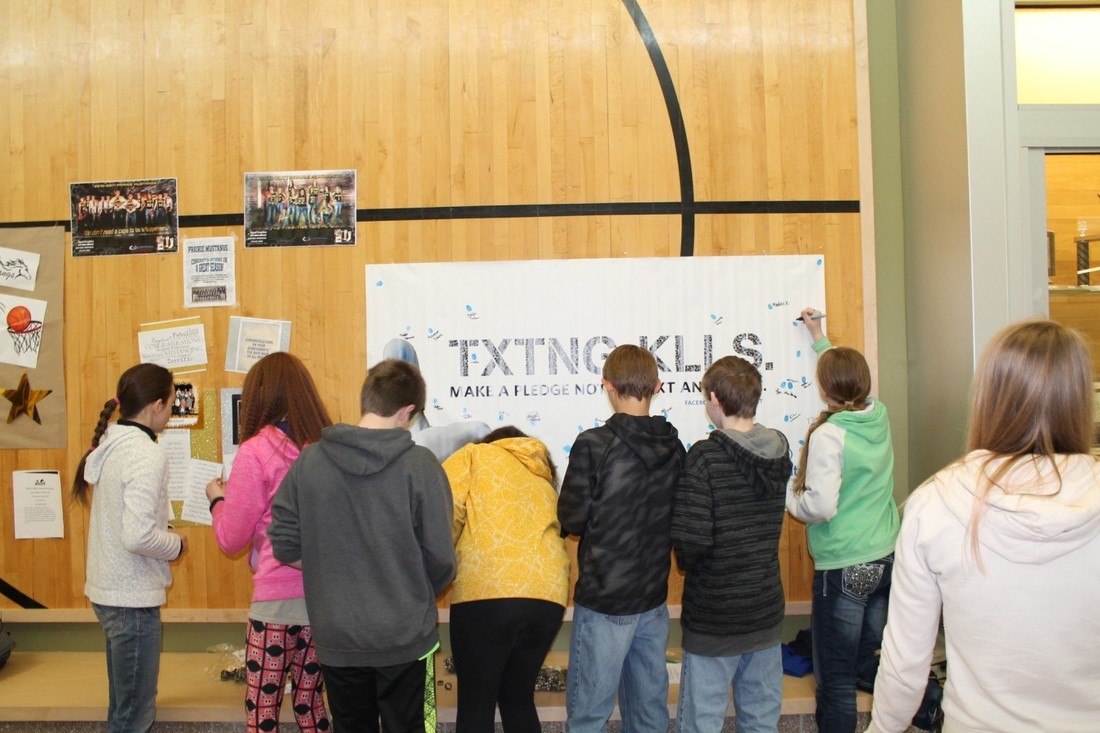 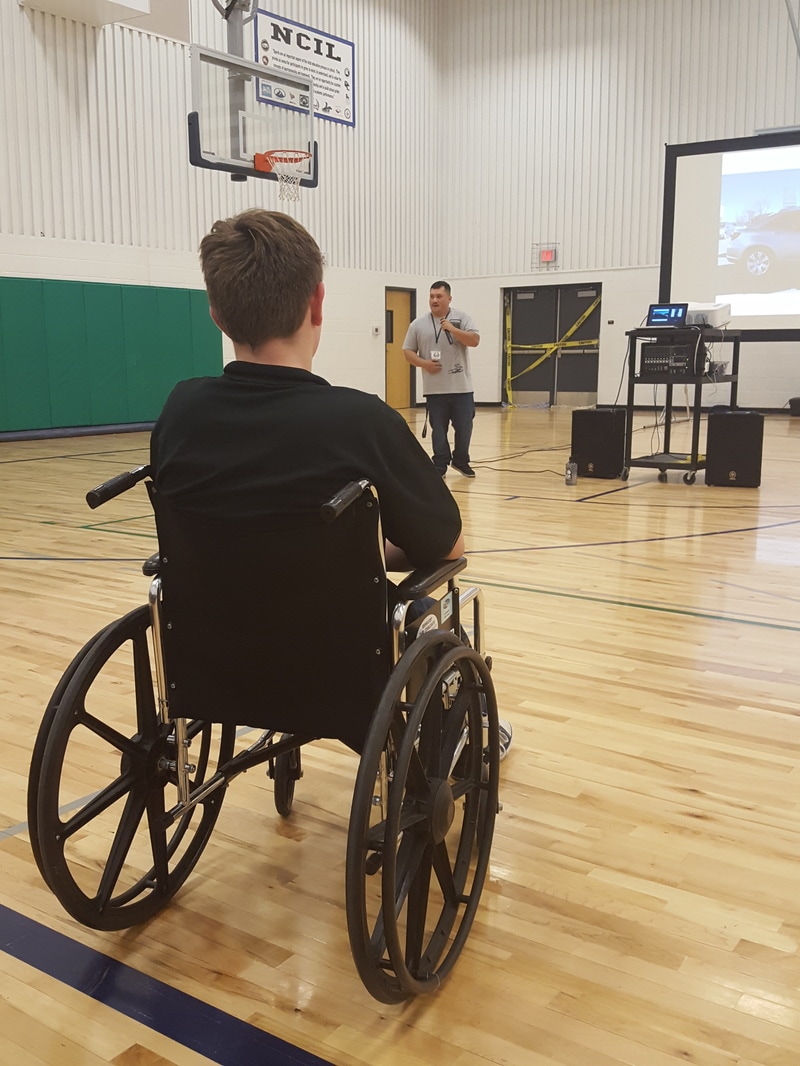 A WCA Student takes a seat in a wheelchair while survivor Luis Cerenil talks about the results of his distracted driving crash.
April 5 - 7. 2017
Two DSWC crash cars are being used for pre-prom safety awareness.  BUDS participant Madisyn, will be having the driver of one of the vehicles speak at the school. 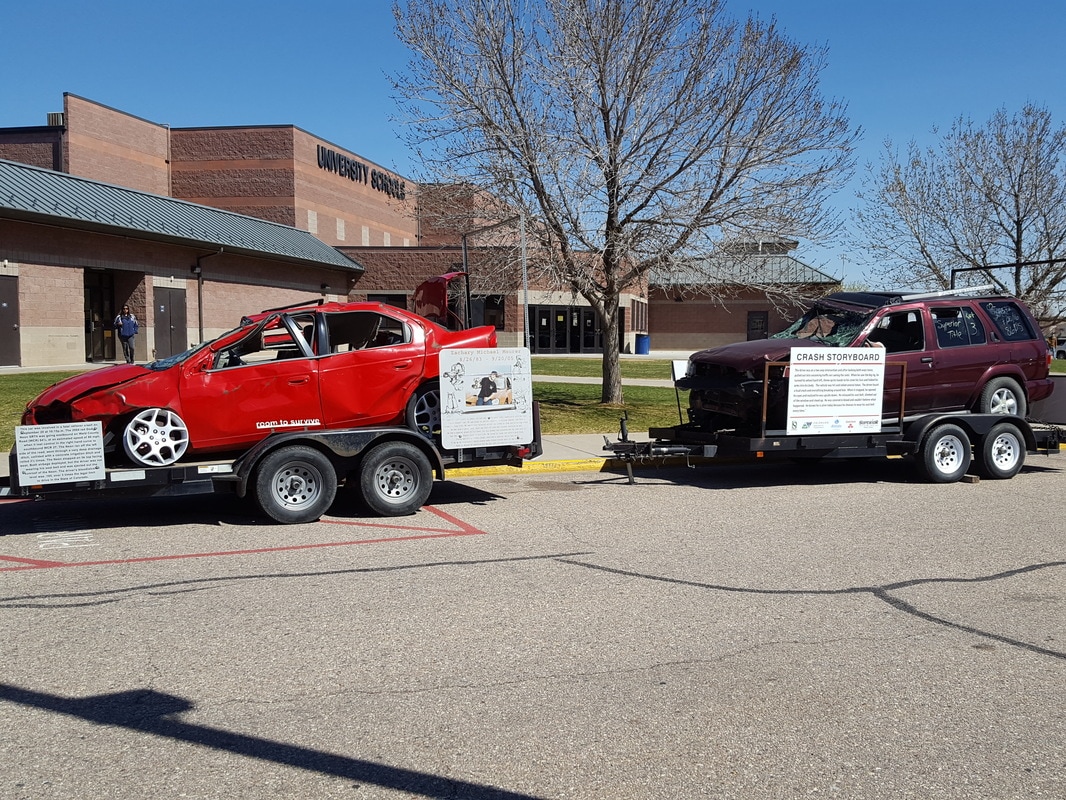 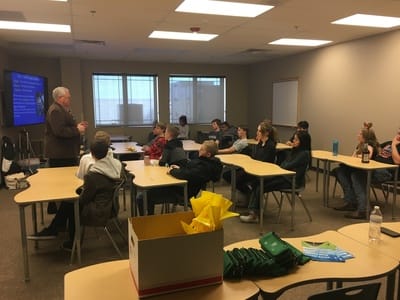 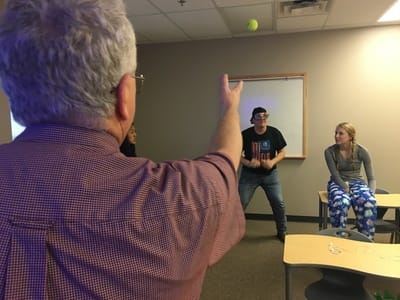 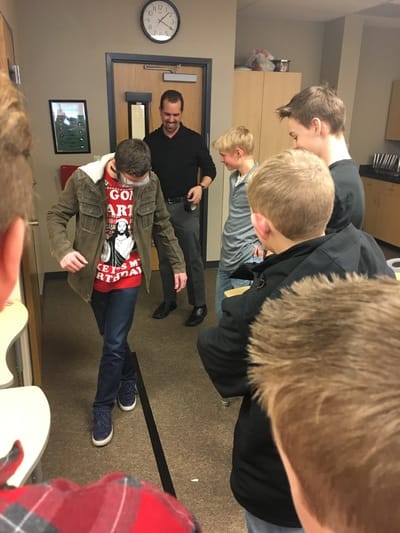 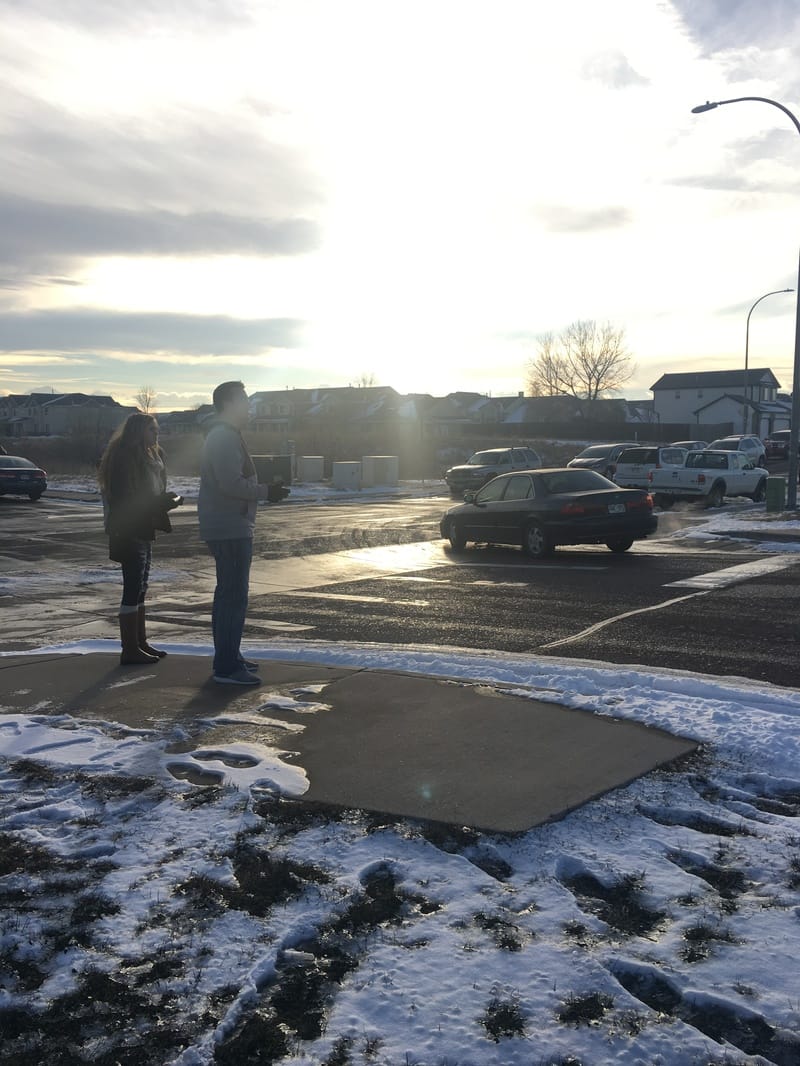 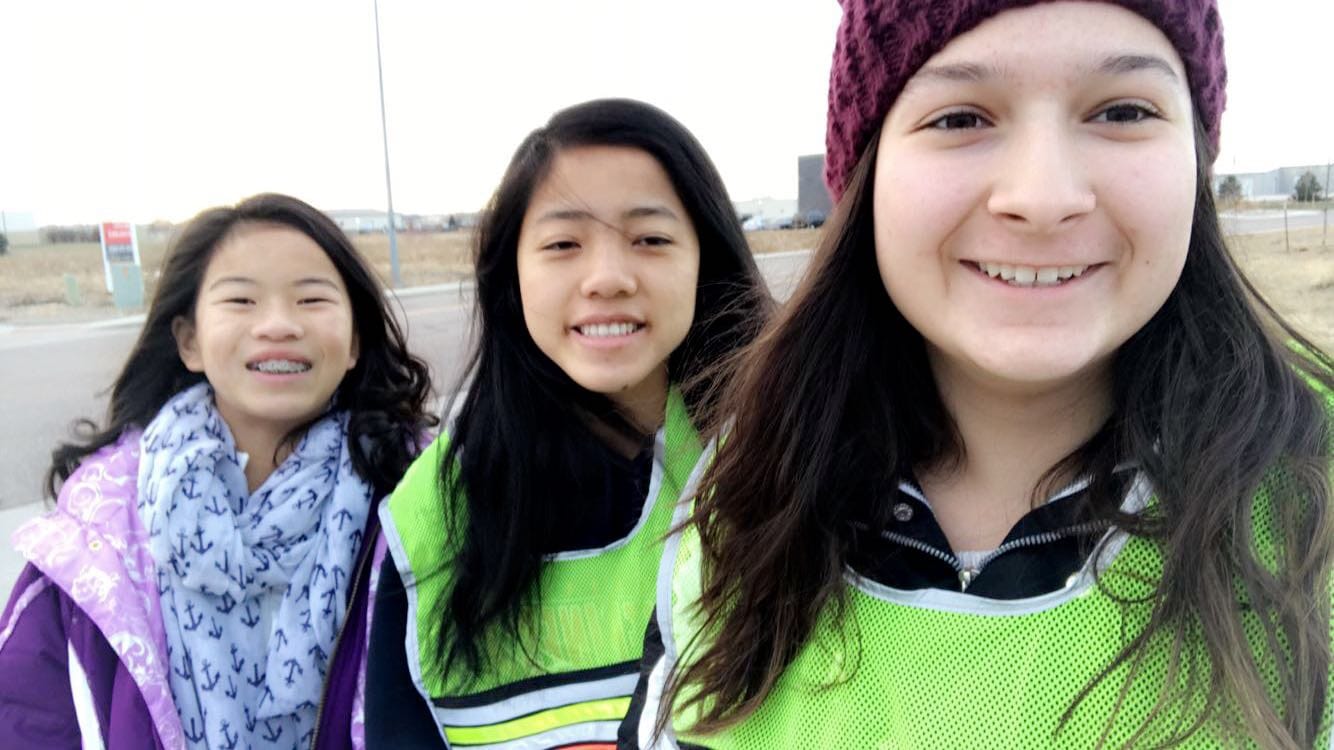